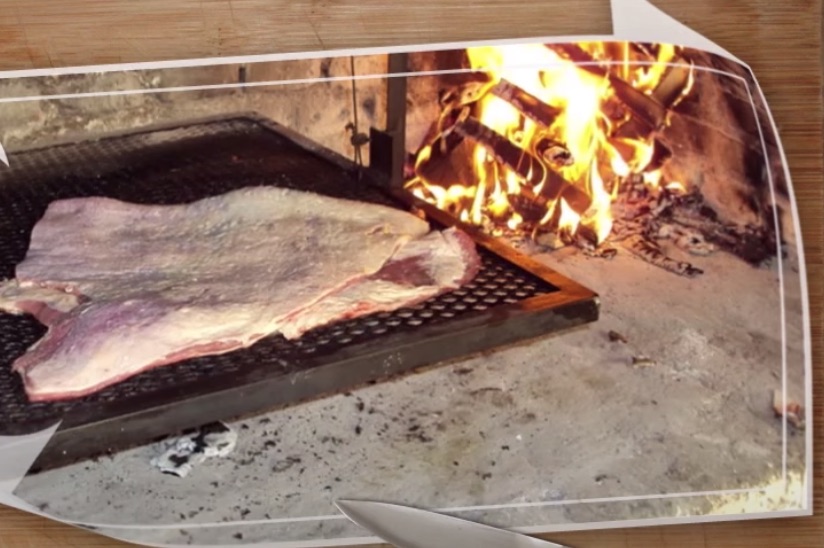 Matambre is a must have beef cut at any argentinian steakhouse. However, it is rarely seen outside Argentina, or outside the Southern Cone of America, as Uruguayans, Paraguayans, Brazilians and Chileans also eat matambre.

In the US, Matambre is called Rose Meat or Shoulder Rose Meat

According to the USDA guidelines, as included in the Item Number 194 for beef cut purchasers, the matambre, elephant ear, or fly shaker beef cut is called Rose Meat or Shoulder Rose Meat.

In the US the rose meat is very rarely seen as a whole cut. It is used a ground beef for burgers combined with other cuts (some 50% of beef in the US is consumed as ground beef).

The rose meat cut comprises two muscles: cutaneous omobrachialis and the M. cutaneous trunci from the flank of the carcass. It is extracted from the exterior of the carcass before making the primal cuts.

Matambre is actually the whole cutaneous muscle of the cattle. It is a long and flat meat cut that extends on the cow’s flank from the chuck to the inguinal part of beef.

The matambre, meaning literally “hunger killer” is a non expensive beef cut everywhere. In Argentina is now more appreciated as urban grill masters have discovered the virtues of an honest cut.

Originally the matambre was used in Argentina to feed dogs as its meat if not treated correctly could be chewy.

The Matambre a la parrilla is one of the most common ways to have this beef cut made in the interior of Argentina, not in Buenos Aires.

Normally, the whole cut, the cutaneous muscle is grilled slowly in a wooden fire pit on the ground, making it tender slowly and losing its fat excess.

The matambrito tiernizado was a creation of Buenos Aires steakhouses in Argentina to make use of a beef cut that cannot be processed or grilled in a whole piece.

The matambrito tiernizado is the whole matambre cut in rectangular pieces, that is tenderized for a whole night with milk.

The morning after the matambre cut is ready to grill and show off its flavors. A firm fire would be great to make the exterior fat crispy so as to mix textures in the same bite.

A bit of Salsa Criolla or Chimichurri could be a good way to accompany the matambre.

The matambre a la pizza is great way to combine two Argentinian passions: beef and pizza. About 60% of people living in Buenos Aires are from Italian descent, combined with may other immigration origins, who integrated in what is now known as the Argentina culture.

The matambre a la pizza is a tenderized fly shake cut that is left clean of fat excess used as a base for pizza. Once the matambre reaches its grilling term on a charcoal parrilla (or alternatively in an oven), it is topped with traditional pizza sauce (tomato, garlic, oregano) and then covered with ham and mozzarella cheese. Olives on top are commonly used.

What part of the cow is matambre or fly shaker from?

The matambre or fly shaker is the cutaneous muscle that separates the ribs of the cow from the skin. When cattle are disturbed by flies and other insects, they twitch the cutaneous muscle, creating a vibration so as to get rid of the bugs. That is why the matambre or suadero (in Mexico) is called in the US fly shaker, elephant ear (elephants use their ears to shake flies) or twitch.

In this video, a traditional argentinian butcher, Mario Ponce de León, de Dean Funes, Provincia de Córdoba, shows how the fly shaker cut is the first one to be extracted from the beef carcass upon arrival to the butcher shop.

He also describes the exterior fat cover of the rose meat beef cut, and its rose meat. These two different components of the cut, the fat and the rose meat, when grilled, give the fly shaker in the traditional Argentinian parrilla a complex texture and a delicious flavor. The exterior fat is browned as it is facing the charcoal most of the grilling time.

As opposed to the humble standing of this cut abroad, in Argentina some “asadores” call it the king of the asado, as it is a must have in any special barbecue celebration like mothers’ day, and birthdays and other special events. This is true for Argentina’s interior, but not so common in Buenos Aires.

Matambre de cerdo or matambrito de cerdo (“pork matambre”) are the same cutaneous muscle as the beef matambre, but coming from a hog.

In the case of the matambrito de cerdo, the cut does not need to be boiled or marinated for more tenderness, however many Argentinians do it anyway. The Argentinian hogs are smaller and lighter than the US or European hogs, so the meat is always tender.

Difference between Matambre and Suadero

Suadero is the Mexican word for Matambre. It refers to the exactly same cutaneous muscle of cattle.

However, as for most beef cuts, the Mexicans prefer to trim the cut to small pieces so it can be eaten like a taco.

The Mexican suadero is usually not grilled, but fried in pork fat (“manteca” as they call it). The suadero then is mixed with onions and other spices and fried in large pans at the streets. The suadero is a very popular taco for people eating street food throughout the cities of Mexico. Unlike the Argentinian matambre, the suadero tacos use a lot of spicy sauce made of different type of chiles.