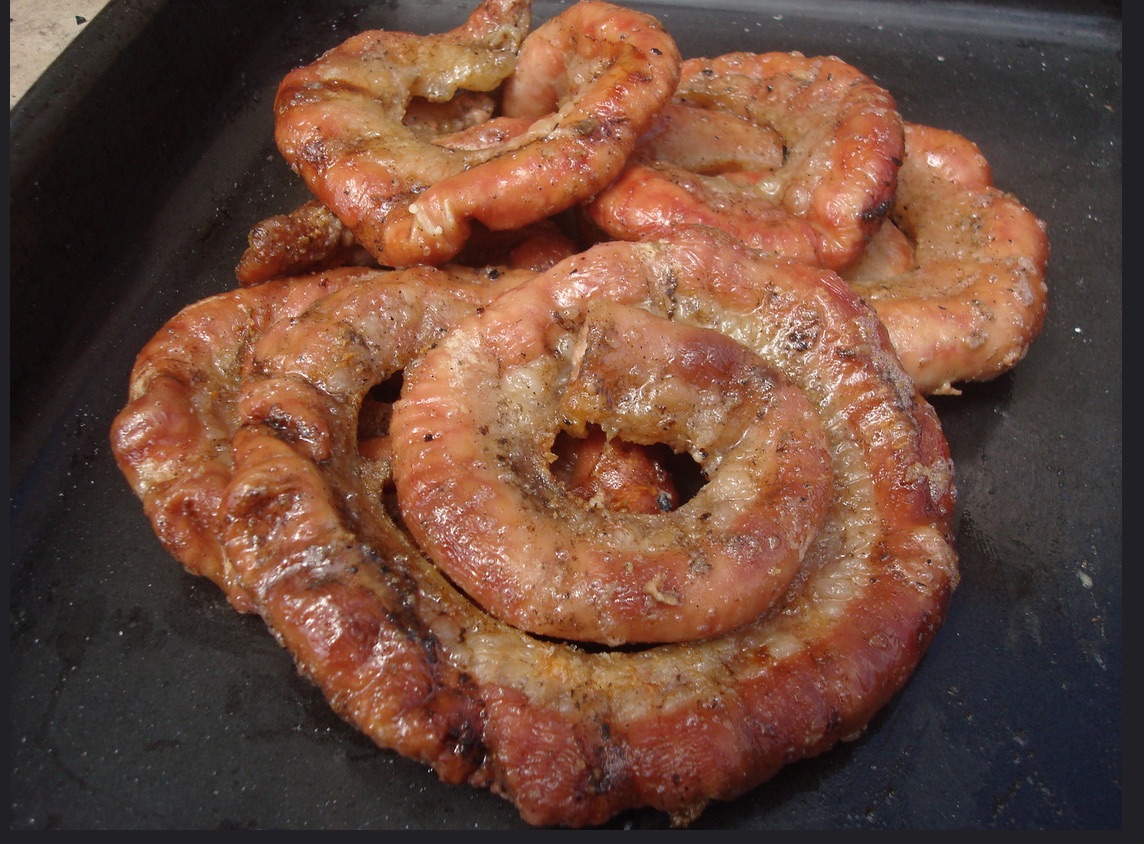 Chinchulines or “chinchu” are a regular starter at an Argentinian steakhouse. Together with other Argentine starters like empanadas, provoleta, chorizo and morcilla, the chinchulines is what you should eat before getting into serious Argentine beef feasting.

In a serious Argentine steakhouse you will always find an Offals space within the starters list, including chinchulines, mollejas (sweatbreads), riñon (kidney) and less frequently tripa gorda (large instestine) and ubre (udder).

Served on a hot iron grill, with lemon halves on the side. They are a beauty, a witness of our carnivorous evolution as a species.

It is very common common to watch them eaten with chimichurri or salsa criolla, but a truly good chinchulin needs nothing. Maybe just the smell of a drop of fresh lemon juice.

Chinchulines are actually the small intestine of beef cattle, though at some parrillas you can also find lamb chinchulines (chinchulines de cordero). They are part of a family of guts (achuras or vísceras) that are often included in Argentine restaurants menus, but also consumed in other cuisines around the world.

The Argentine chinchulines are grilled on charcoal or wood and eaten in small circle cuts resulting from the twirls of cutting the intestine in pieces 5 inches long. I’ve read articles stating that a chinchulin is fried and braided, two serious offenses to tradition of the real argentine chinculín. You fry chicken wings, not chinchulines. As per the braided confusion, it is mostly because of the less popular Tripa Gorda, chinchulines’ big brother (big intestine), are the ones that are braided.

The chinchulin is very tasty, with a special flavor, full of fat. Because of that, the chinchulines have to be grilled crispy. There are few things in an Argentine parrilla that can taste worse than a medium rear chinchulin.

The poor origin of chinchulines

Despite cattle (all or them other than llamas, alpacas, guanacos and relative wild ruminants) were brought to the Americas by the Conquistadores after the end of the XV’s century, the chinchulines and the achuras (the family of gut beef cuts where the chinchulín belongs) words have an indigenous root. For the sake of simplification, we’ll call the Native Americans or indigenous people “Indians”, the way they were known at that time.

Ch’unchu is the quechua word that gave birth to Chinchulin. Quechuas were a southern frontier civilization part of the Inca Empire that lived in Northwestern Argentina and the neighboring areas of Bolivia and the former Bolivia’s and Peruvian’s regions seized by Chile in the “Guerra del Pacífico” (1879-1884).

The Achuras word, the family of gut cuts where chinchulines belong, also have an indigenous origin. It was derived from the Mapuche / Araucano word “Achuray” or “Achuraj”, that meant both “share” or “share the stolen stuff”. The Mapuche or Araucano are an indigenous tribe from Chile that later in the XVII, XVIII and XIX’s Century invaded Argentina’s Patagonia, butchering the original population of Tehuelches native Patagonians.

For over two centuries before Argentina starting exporting beef to Europe, the Chinchulines, together with almost all of the meat of cow was left to rotten after the gauchos (the Argentine cowboys) would take the skin of a wild cow, and a little meat for a quick lunch. Because of the lack of cold storage, only a salted skin would be of a certain value if you were a gaucho a horse-back week away from a city, let alone exports.

Later, when Argentina started exporting leather of processed beef (salted dry beef) at plants called “Saladeros” (Salting Houses), the chinchulines and all the achuras would be left for roaming dogs, and for freed slaves and their free born black american descendants. Argentina partially abolished slavery as early as 1813 (all slave born children would be free citizens), and then totally abolished slavery by the 1853 Constitution. But sadly, most of the African American Argentinians did not make it to the new Argentina. Most of the freed slaves and their children died either by desease or at the Infantry rows of the Civil Wars or the Paraguayan war.

With the expansion of Argentina’s estancias (Cattle Ranches) into the SouthWest, the Mapuches thrived as they no longer had to hunt guanacos and other wild herbivores to eat, they’d rather steal cattle from Estancias.

Mapuches stormed the Argentinian pioneers’ Estancias for over fifty years, stealing cattle and killing and kidnapping women and children, until General Julio Argentino Roca defeated the Chilean invaders in 1880.

The remaining Indians were spread in different reservations around the country. It was a very similar process of what happened in the USA and its big “way West”. The big difference was that when the Dictatorship of Juan Domingo Peron started in 1943, a lot of this Indian population was converted to industrial workers, left the reservations and the poorest Argentinian regions to move to shanty towns in the Buenos Aires suburbs. Population growth in these suburbs skyrocketed, due to extremely high birth rates and internal immigration. In some 30 years, the Peronism transform one of the richest and by far the most educated population in a failed Latin American country like any other.

The Chilean Mapuche Indians defeated in the 1880 war, assimilated -to an ever decreasing degree- with European immigrants (70% of Buenos Aires’ population in 1910) and now rule Argentina. They vote Peronist (60%-80%), and they probably represent 60% of all electors in the roll.

In 2020 Argentina, the Indians run the almighty Peronist party, all the powerful labor unions and even created an ideologic framework to sustain a new nationalist and populist “nac & pop” culture (funded by a totalitarian state -Mussolini style).

Numbered #617, Chinchulines are the last of the Argentine beef cuts listed at the official beef cuts Nomencuture developed by SENASA.

According to the nomenclature, and technically speaking, the chinchulines are the duodenenum, the first section of the small intestine. It also remarks that it must be free of omentum (the tissue that contains the liver, intestine and stomach) and the mesentery peritonium.